The pattern has been re-worked.  The new structure is also looking ripe for a reversal.  But once bitten, twice shy, and we will await further confirmation before entering a long trade i.e. long USD / INR.

A different ending diagonal appears to be complete or near complete at 72.25.  Price should rapidly make it's way above 74 under this count.

There is no change to the larger structures. 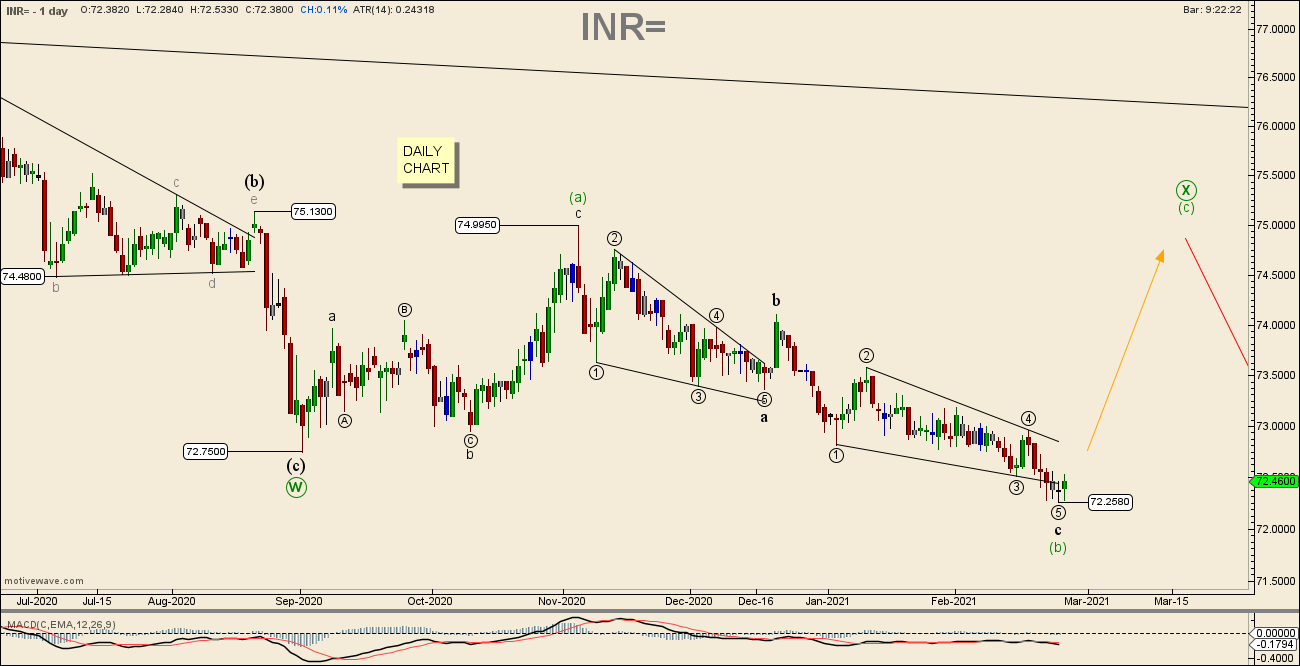 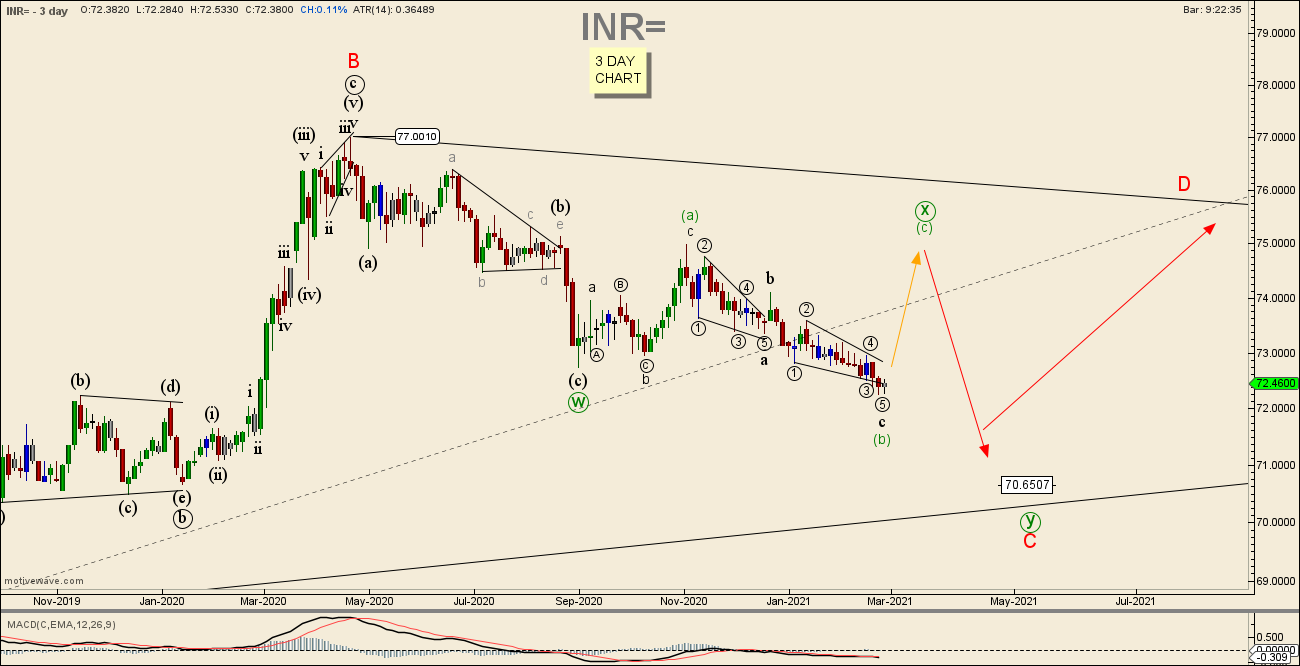 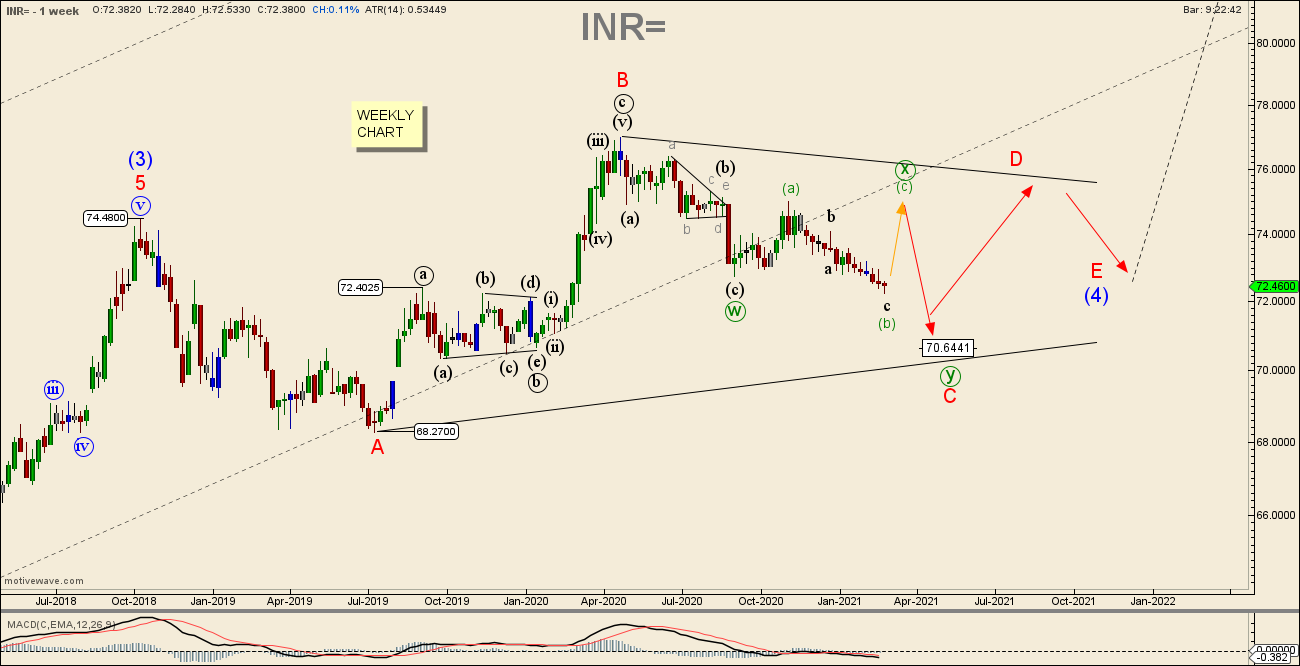 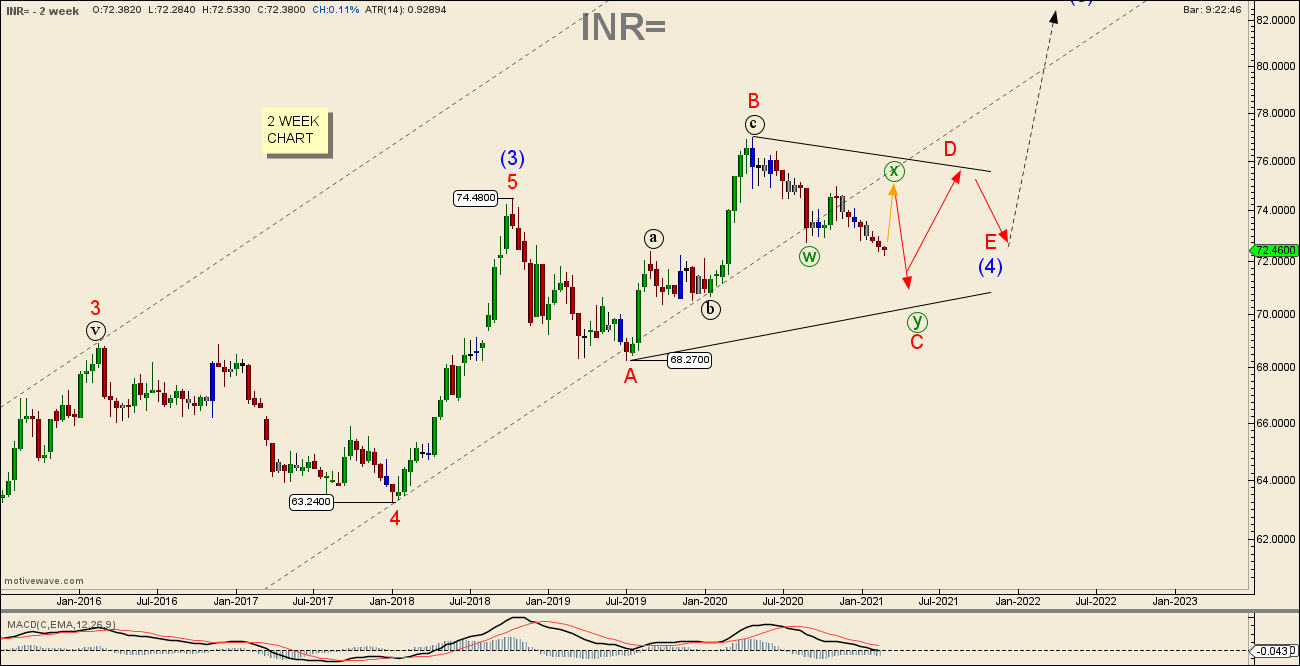 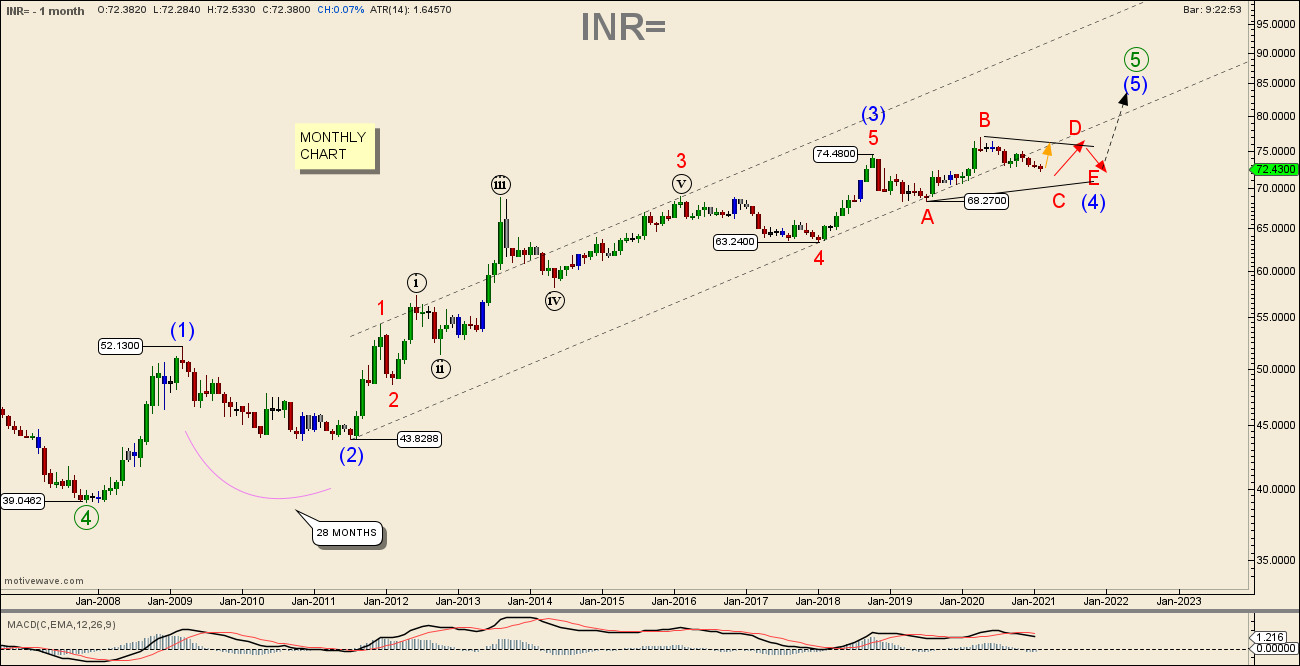 Our accuracy on the USD / INR chart has been literally off-the-charts (so far).  The strengthening of the rupee ended exactly at 72.50.  Rupee has weakened since then, bolstering the probability that a temporary low is in place at 72.50, and USD / INR is heading up to the 75 level.

Bottom line : A change in trend is likely. Rupee weakening could also portend a correction in equities.

Way back in April 2020, when the Rupee had weakened to almost 77, we identified a turn was imminent.  We also identified then where price was likely to go "The lower trend channel comes in at about roughly 72 level, so this is a rough area of strong support."

Over time we fine-tuned the target to below 72.80, which was attained a few weeks ago, and said "Minimum requirement for completion of the ending diagonal has been met at 72.78.  It is possible the rupee could still strengthen for a few more days to the 72.50 level, but the next significant move should be weakening to the 75 level."

Under the ending diagonal on the daily chart, price has moved sufficiently to reach 72.55, and a turn is demanded from current levels.

Notice the daily chart again.  A possible wedge has formed within the 5th wave of the ending diagonal.  Price appears ripe to commence a turn up to 75.

A rally above 73.20 would likely be enough confirmation the turn has occured.

The ending diagonal would be invalidated if price reaches 72.25, and a re-evaluation of the count would be called for.

Bottom line : Weakening of the Rupee should commence soon, to the 75 level, after which a period of strengthening to the 70 level.

Minimum requirement for completion of the ending diagonal has been met at 72.78.  It is possible the rupee could still strengthen for a few more days to the 72.50 level, but the next significant move should be weakening to the 75 level.

The USD / INR chart is fairly complicated.  Price is in a larger 4th wave triangle.  Within this triangle, price is unfolding as a complex Wave C to under 71.

This should be followed by a quick reversal to the 75 level in a flat correction of wave X.

This may be significant for equities as well.  Rupee weakness is often associated with equity weakness.  Rupee weakness to 75 could well be the wave iv correction of minor degree in the Nifty 50, which could take the index down to the 14,000 level.

Bottom line : Another few days of rupee strength to 72.50 ~ 72.75 could be showing us the end of the immediate equity rally.

Expectation is still for rupee to strengthen below 71 in a complex double correction, but which route it will take is unclear.

Below is the best projection we have at this stage.

Not much to add from previous post of 12 Dec.

Price is in a complex correction in wave C down of a larger 4th wave triangle.

The 3 day chart would probably be of the most interest for Rupee direction over the next few weeks and months.

Trading this pair remains difficult.  Price is in a complex correction in wave C down of a triangle.

Expectation remains for the rupee to strengthen to below 71 before larger weakness resumes.

The route that this pair will take to reach below 71 is difficult to project, but below is the best hypothesis we have at this stage.

The 3 day chart would probably be of the most interest for Rupee direction over the next few months. 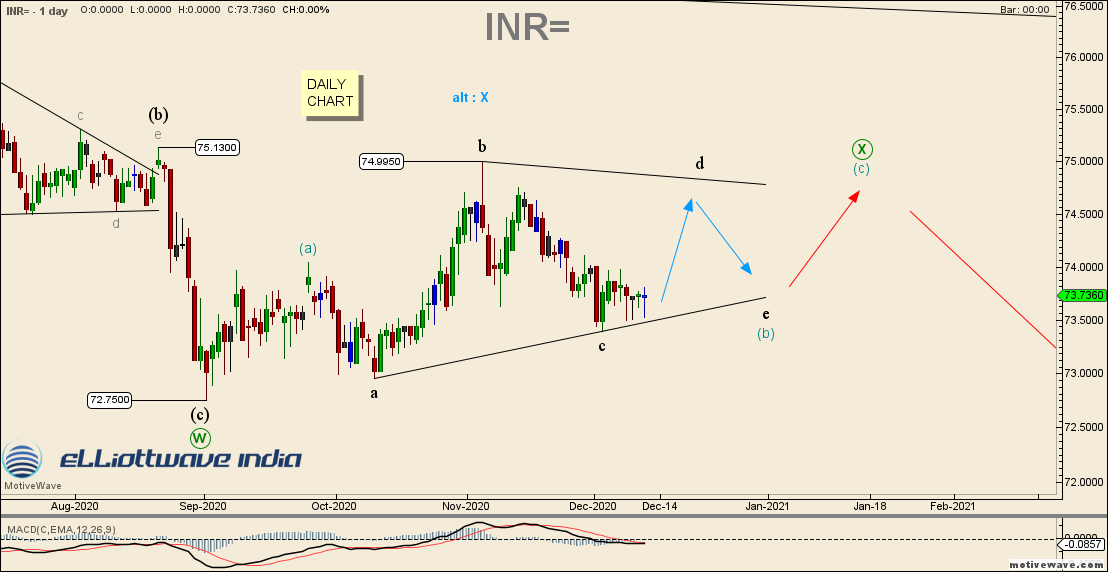 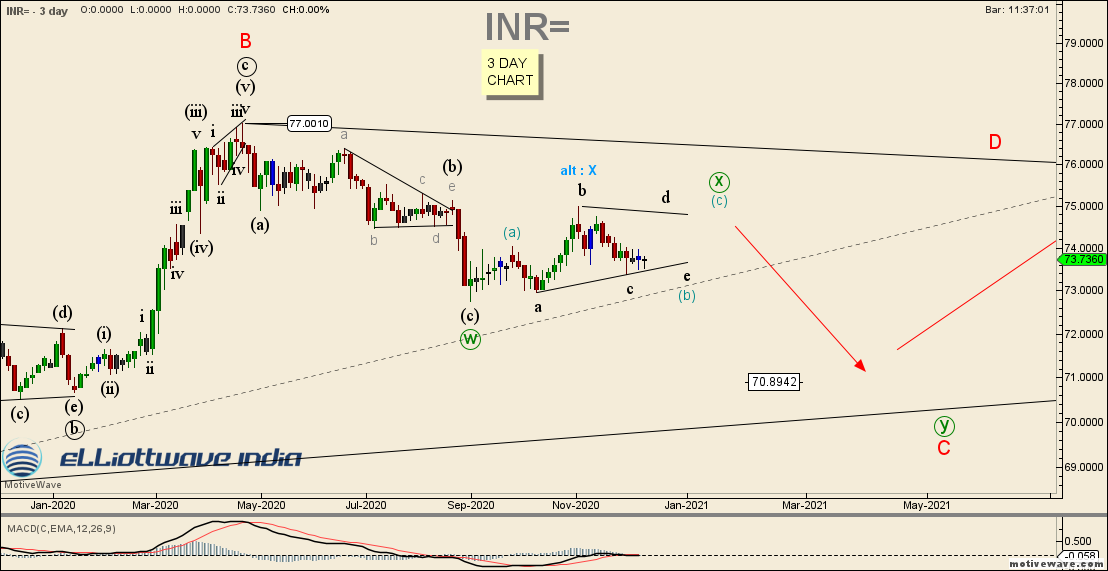 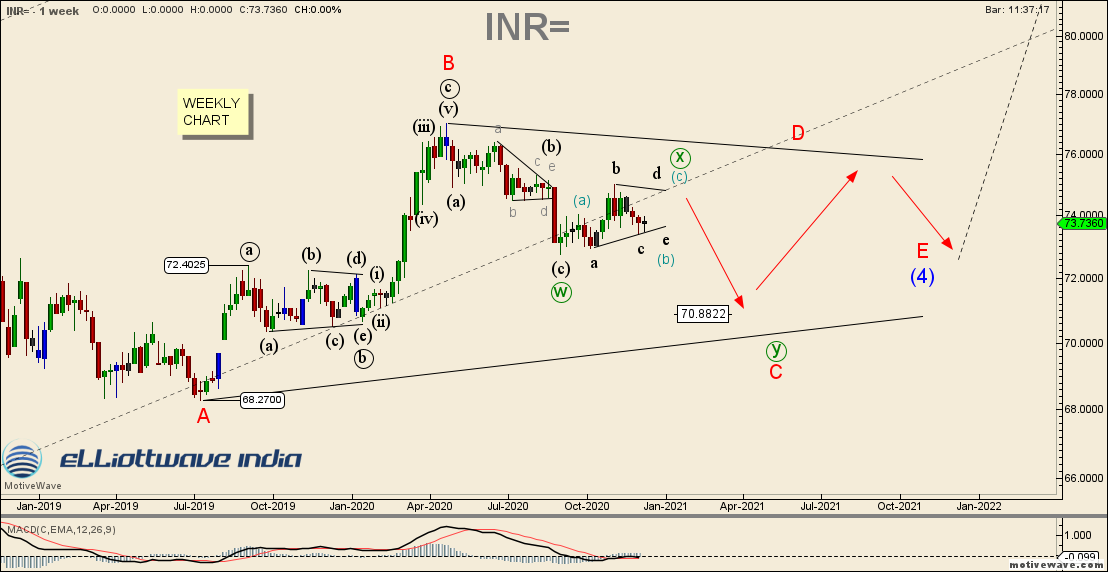 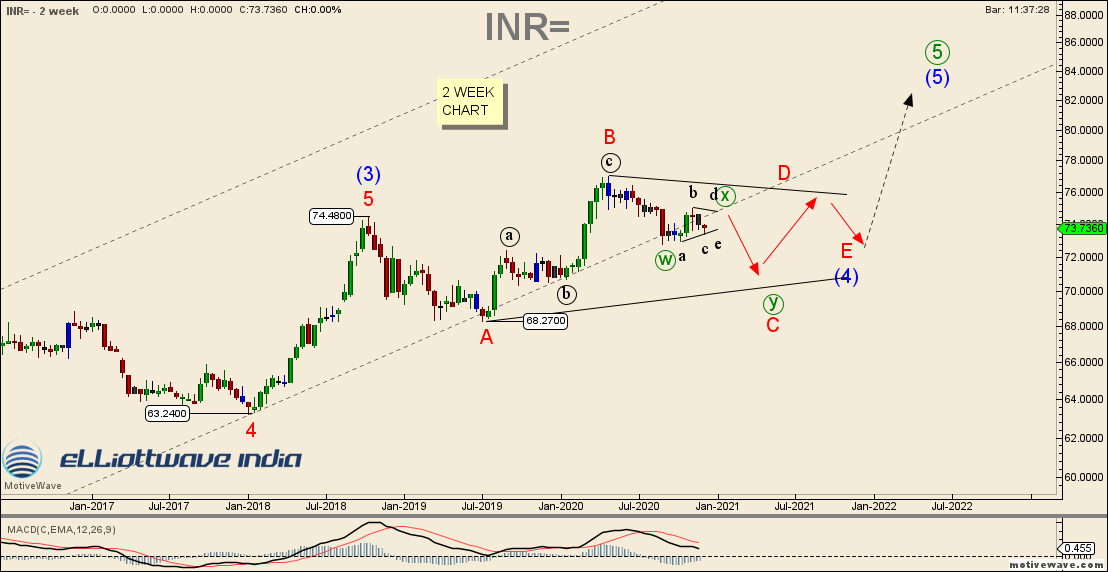 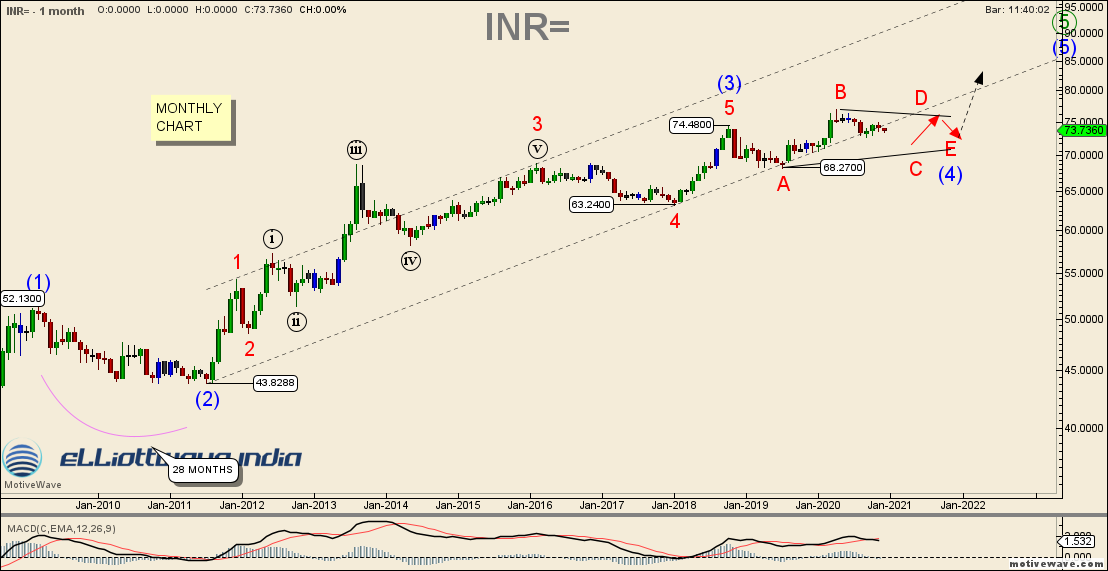 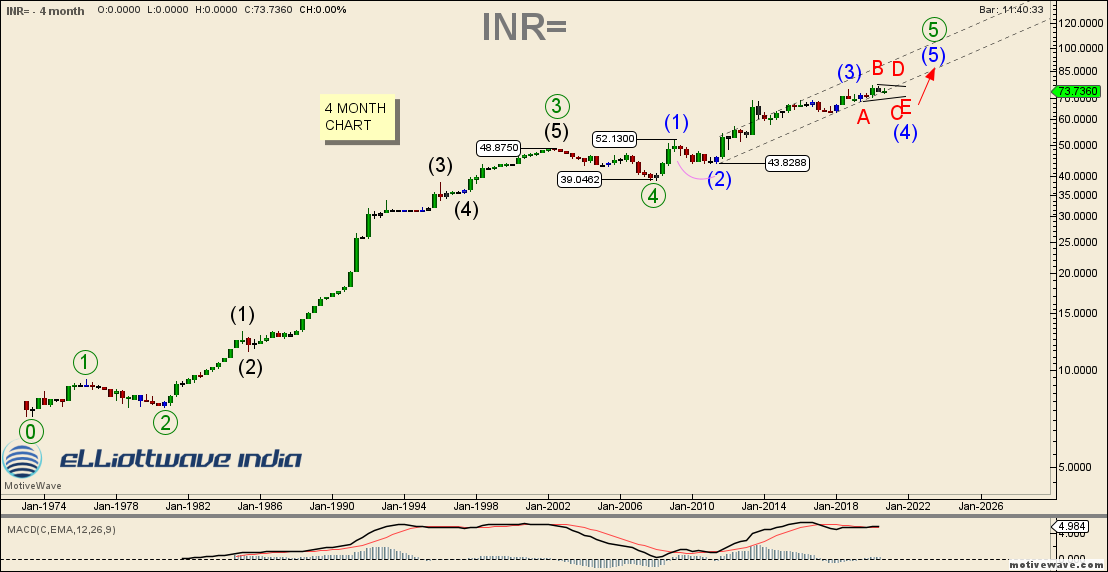 There is no change from earlier posts.  Price is following script which calls for rupee strength to near or below 71.

But trading this pair remains difficult as it is a choppy move, and is not providing short term patterns for entry.

From post of 29 Oct "The recent weakness in the rupee from under 73 to above 74 appears to be corrective (so far)."

From post of 9 Nov "We suspect price is still in wave C down of a triangle that should take price to near or below 71...This wave C appears to be unfolding as a double correction (WXY) to the downside." 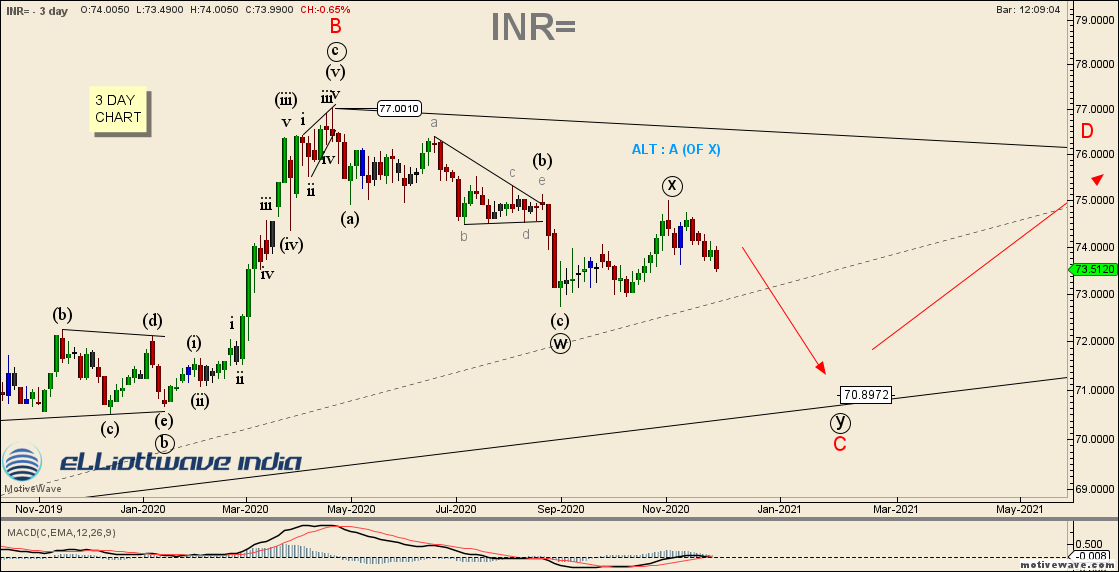 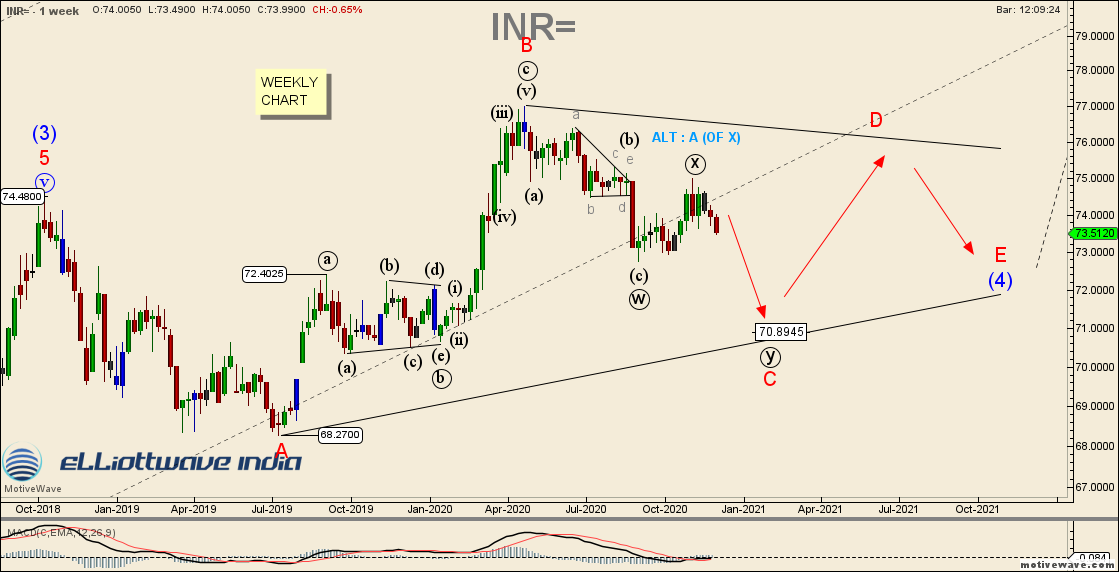 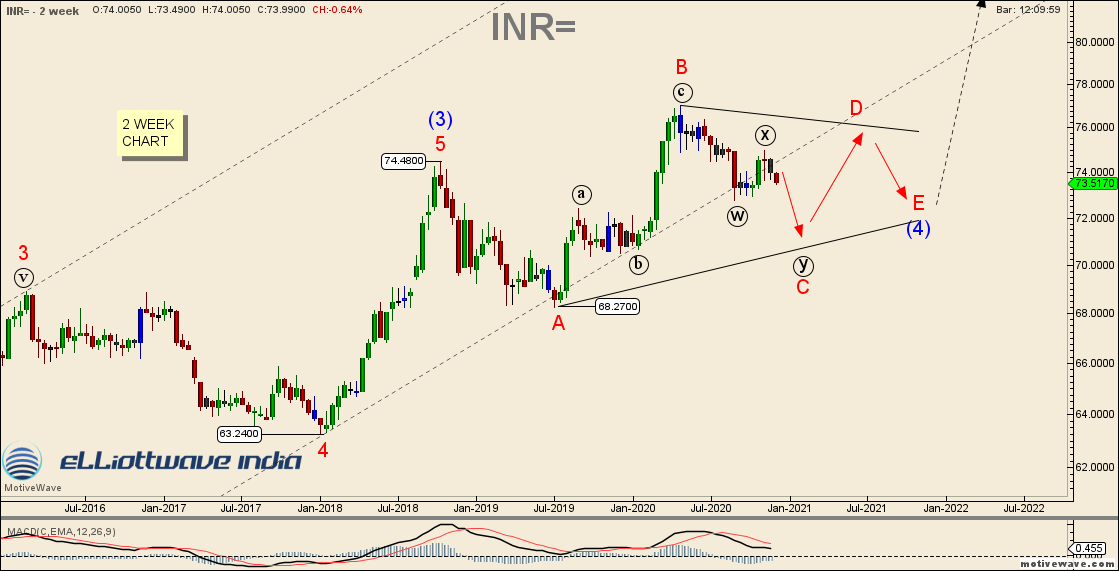 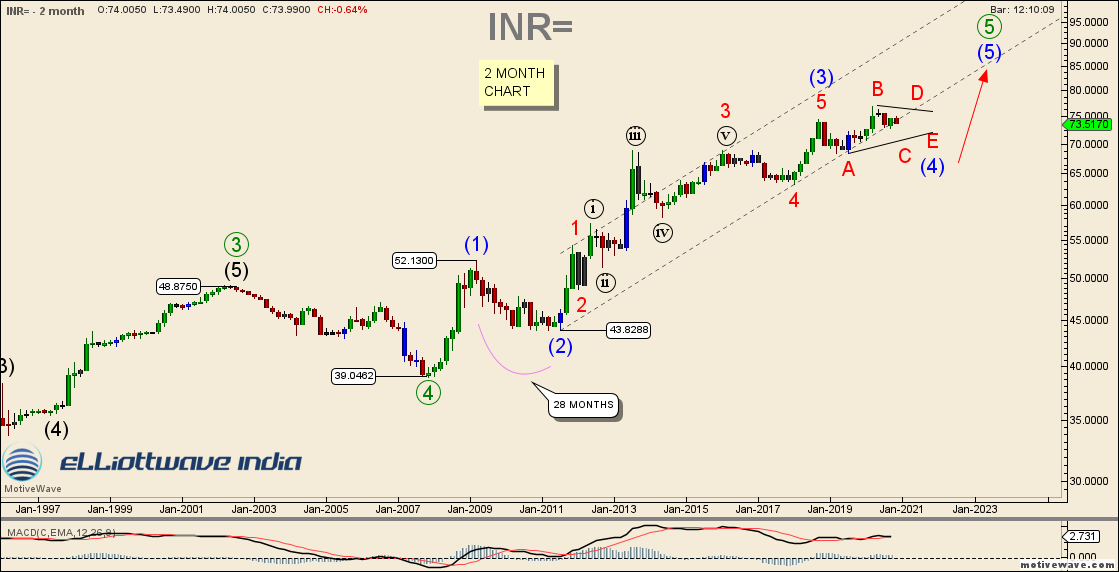 From previous post of 29 Oct "The recent weakness in the rupee from under 73 to above 74 appears to be corrective (so far)."

We suspect price is still in wave C down of a triangle that should take price to near or below 71.

This wave C appears to be unfolding as a double correction (WXY) to the downside.

The recent weakness in the rupee from under 73 to above 74 appears to be corrective (so far).  It is early to have any level of confidence, but an ending diagonal could be playing out to the downside, which means further rupee strength.

This count would be invalidated if 75.13 is first exceeded.

Price is essentially where it was a month ago.  No change.  It has remained in a tight range.   Price is currently below the ichimoku cloud, which is acting as resistance.  As long as price remains below the cloud, rupee strength is preferred.

Preference is for continued rupee strength to below 72.

That said, tread carefully.  Minimum target has been met, so a trend reversal is also a possibility.

Larger picture, price is likely in wave C down of a larger bullish triangle.

Preference is for continued rupee strength to below 72, especially if equities are headed up in a larger 5th wave.

That said, tread carefully.  Minimum target has been met, so a trend reversal is also a possibility. 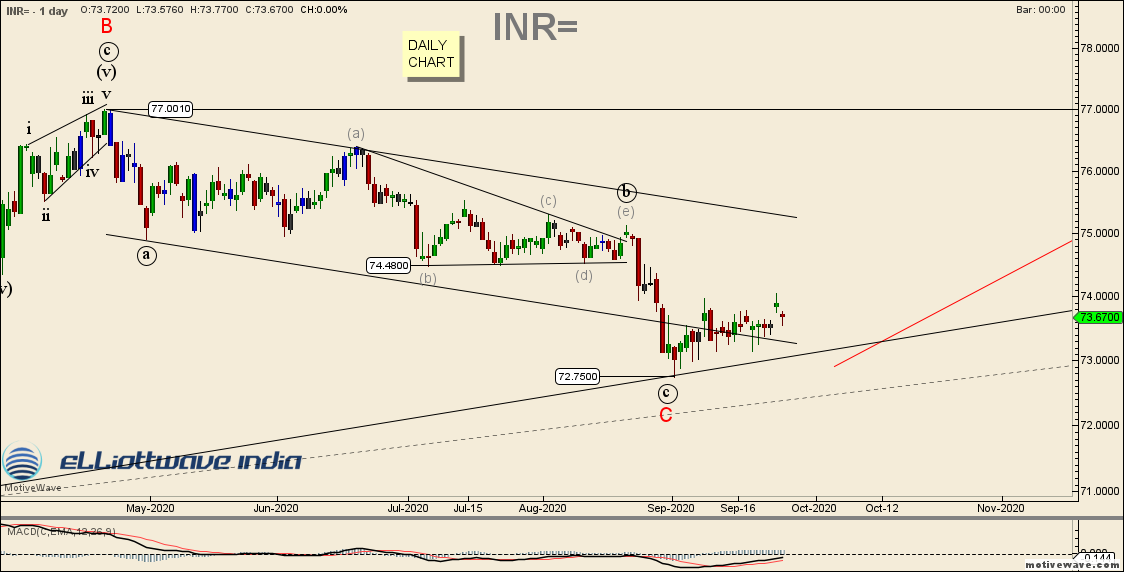 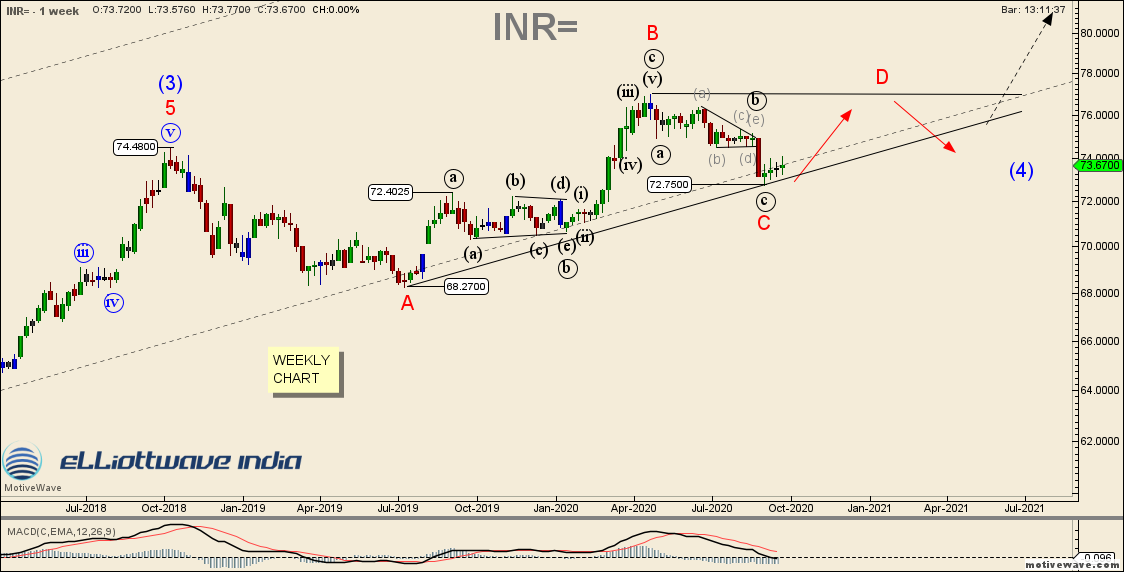 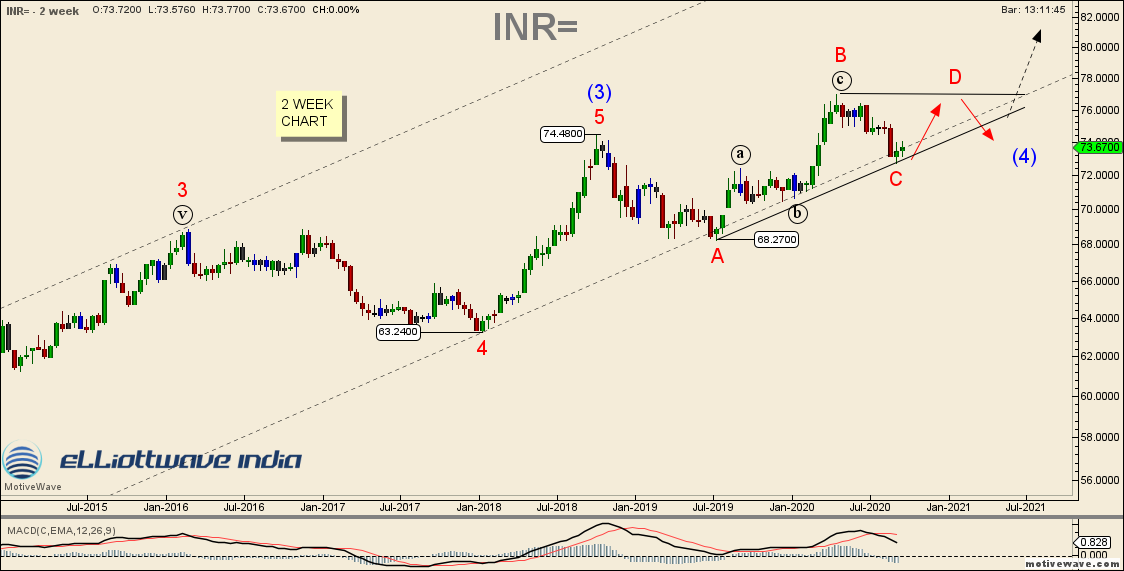 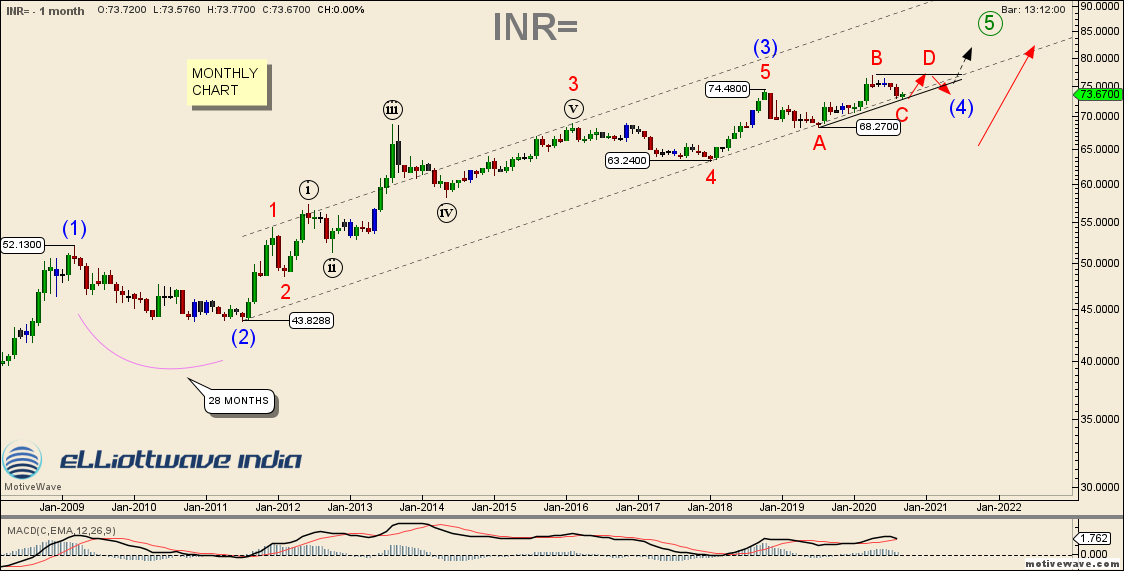 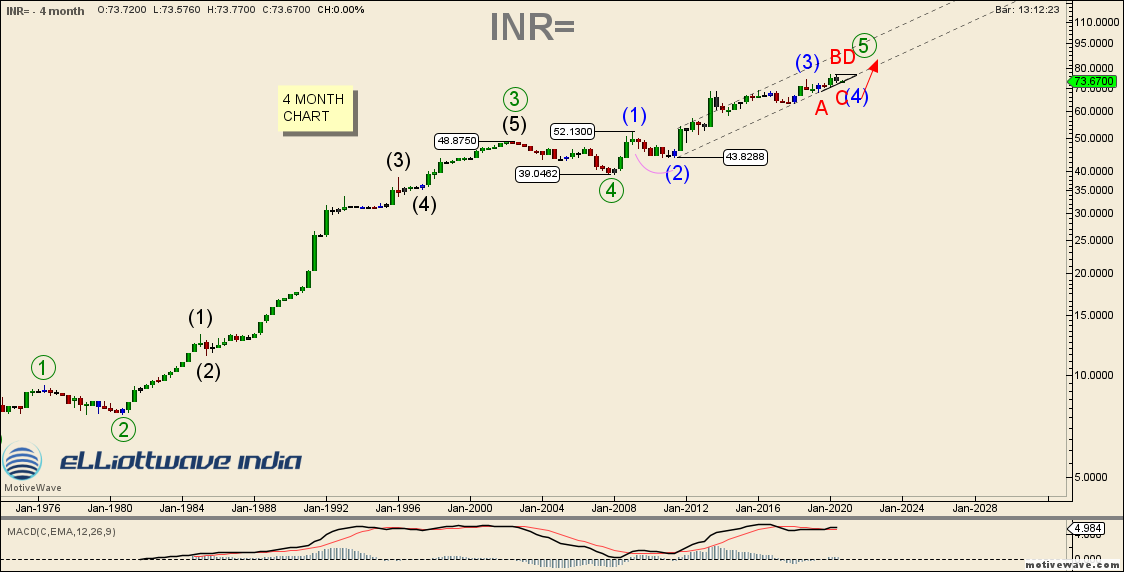 Price has rushed to our 1st target of roughly 73.  We called for a turn in trend way back in April 2020.  But trading the USD / INR short term has been another level of difficulty.

2nd target is about 72 ~ 72.50 to complete wave c of a larger wave C triangle.  Once price reaches this level, a turn in trend is again expected as there is strong support in this region of 72.

Pattern identified back on April 22, 2020, and hasn't changed since.  See previous tabs and conclusion of April 22.

To put price into context, it appears to be in wave C down of a 4th wave bullish triangle (see previous posts for more detailed analysis).

Price is headed lower in wave (c) of C (of a larger bullish triangle) to below 73 is the target.

All the indices have lined up - the ducks are in a row, so to speak.  Bank Nifty is the only slight laggard, although it is close to taking out the 1st hurdle at 22,040, which we expect it to do.

Our post of April 22 turned out to be very accurate when price was almost 77.  Remember at the time, the Rupee had been continuously weakening for a month.  But that weakening was in wedge shape (or an ending diagonal), and we called for a reversal.

So far the reversal is on track.  Price could be in a rectangle on the daily chart.  Expectation is for a downside break within the next 2-3 weeks. A downside break of 74.90 would open the 73 level.

The hypothesis we have followed from previous post is of a bullish triangle, specifically price is in wave C down of said bullish triangle that is expected to reach the 72 ~ 73 level.

Please see previous post (next tab) where it has been explained in greater detail.

We start off with the top down larger time frame charts.

Price is likely in a larger wave 4.  The strongest point about this chart is the lower trend channel line that began in year 2011.  Price has bounced off of it several times.  Only a break of this would render price action bearish (rupee strength).

Notice wave 2 of the same degree took up 28 months.  If wave 4 takes up the same amount of time, it should carry to early 2021.  Price is likely in an expanded flat or bullish triangle, with the triangle having an preferential edge.

Weekly and 2 week chart.  Wave B possibly nearing an end.

2 day chart :  This is where one notices 3 features that show at least the short term rally in USD / INR is nearing an end.

Conclusion : In the near term, price appears to be reaching a reversal juncture.   But in the intermediate term, as long as price remains in the trend channel that began in year 2011, rupee remains bearish (i.e. bullish USD / INR).  The lower trend channel comes in at about roughly 72 level, so this is a rough area of strong support.  A bullish triangle as a larger wave 4 would fit the structure perfectly, as well as take up the requisite time.  See below weekly chart.